The Algarve is a vast region with lots of towns spread out across a beautiful coast line with a warm blue sea. It may be difficult to figure out where exactly to go to among so many lovely towns and paradisiacal beaches. That is why we have compiled a list of the 10 best summer destinations in the Algarve. Check out our suggestions below and start now planning your vacations in the Algarve.

Best Places to Visit in Algarve 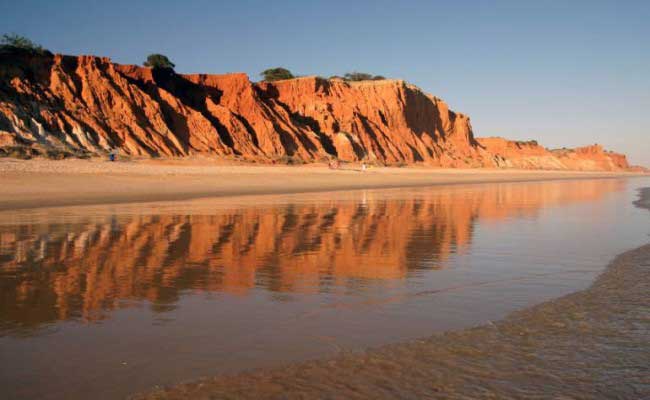 Albufeira is definitely one of the best spots to spend your vacations and arguably the most popular summer destination in the Algarve. That is due to amazing beaches such as Falésia Beach, a beach so big that is used by groups of teenagers, young adults, couples and families, without any of them disturbing the other. Albufeira also manages to simultaneously be both a party destination and a family destination as well.

The famous street known as “the Strip” is filled with bars and clubs where people from all over the world meet to party until dawn. On another part of the town, at the Old Town, there is a family environment as pointed out by the colourful ice-cream parlours, cafes and restaurants. Albufeira is also a great place to try out new and fun activities such as horse-riding, boat tours, paintball and many others. 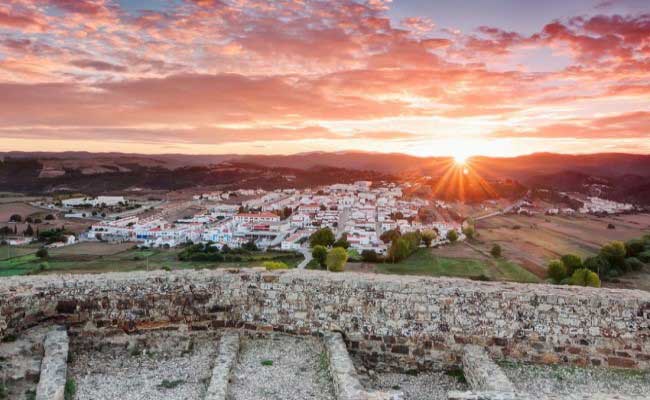 Aljezur is a small charming town placed on the Algrve’s west coast in the famous Costa Vicentina area. This area is very popular among surfers, because of its perfect waves, and to campers due to the absence of big cities, which makes it the perfect place for a camping trip with friends and family.

At night, due to the lack of cities, you get to see an incredibly starry sky. Aljezur is the perfect town for couples looking to escape the pressures of society while enjoying the warm summer days of the Algarve. Its striking scenery sets a romantic mood that is enlarged at sunset. 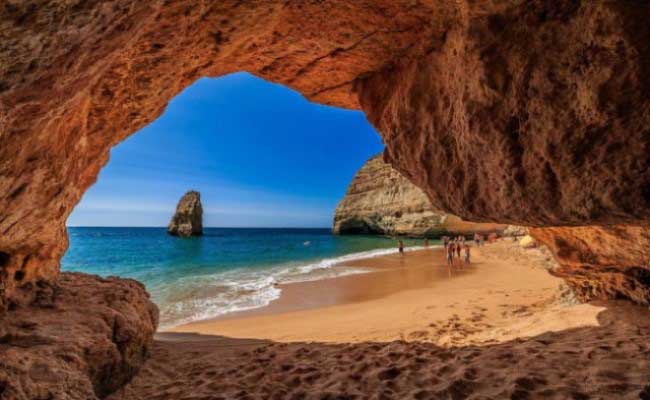 Alvor is closely located to Portimão, on the Algarve’s west part, and was originally named Al-Bûr by the Moors who used to occupy the region. Conquered by king Dom Sancho I in 1189, Alvor’s popularity comes from the amazing nearby beaches, such as Praia da Rocha, the Three Brothers’ Beach (Praia dos Três Irmãos), Submarine’s Beach (Praia do Submarino) and Alvor’s Beach (Praia do Alvor).

Most of these beaches (with the exception of Praia da Rocha) are relatively unknown to tourists, which makes them great places if you are looking to escape the summer crowds. The whole town of Alvor conserves a fresh and discrete vibe which sets it apart from other regional hubs such as Albufeira, Vilamoura or even Faro.

Another popular destination in the Algarve, Armação de Pêra has been enchanting tourists ever since they first arrived to this town in the 1960s. Built right by the ocean, the whole town exhales pure energy and excitement during the summer months. Its famous beaches such as the Beach of Armação de Pêra (Praia de Armação de Pêra) and Kisses’ Beach (Praia dos Beijinhos) present warm waters and rocky formations that create amazing landscapes that will immediately help to feel relaxed.

The Zoomarine theme park, where you can swim with dolphins (among many other things) is located right outside Armação de Pêra, as well as Aqualand, one of the most fun waterparks in the Algarve. Be also sure that you visit the FIESA – International Sand Sculpture Festival where there are 12-meter-high sand sculptures. 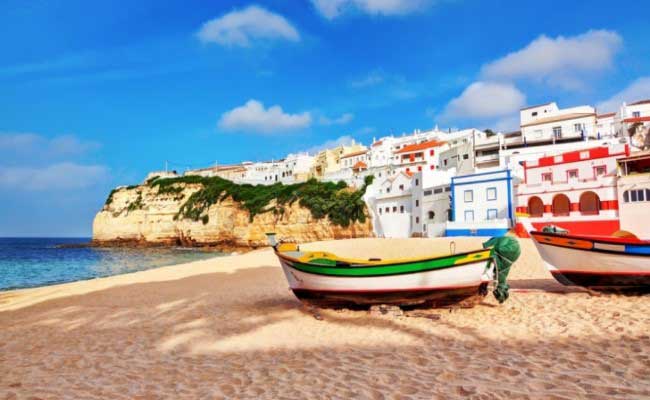 Carvoeiro’s discrete beauty is particularly enlightened in the summer. The early sunrise reveals an old fishing village that has spread over the cliffs of the Atlantic sea. This picturesque town constituted mostly of small white-washed houses is usually visited by couples looking for a romantic getaway.

Truth be told, Carvoeiro is a great place to relax and enjoy the sun lying in a beach. There is a calmness breath out by the town which rapidly penetrates our skin and infiltrates our whole body. Carvoeiro is home to some of the most beautiful beaches in the world such as Benagil Beach (right next to the famous Benagil Cave), Vale de Centeanes’ Beach and Marinha Beach, which was considered to be one of the 10 most beautiful beaches in Europe and one of the 100 most beautiful in the world by the Michelin Guide. 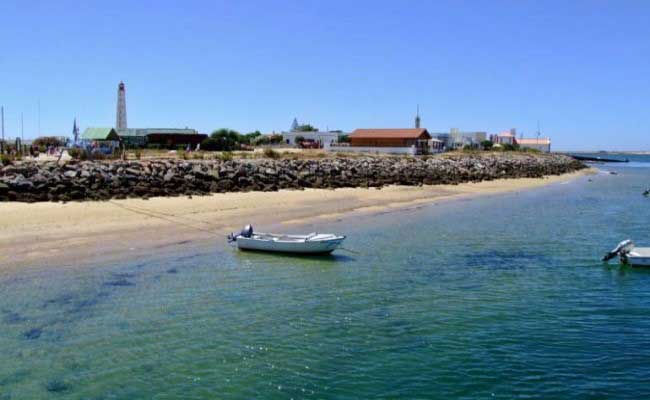 Faro is the Algarve’s capital and the region’s biggest city. It has an international airport where you can take a flight to anywhere in Europe and breath-taking beaches easily spotted from the air when the plane is about to land. Ossónoba, the city’s original name, was founded by the Phoenicians and was later under the occupation of Romans, Byzantines, Visigoths and Moors, until the armies of king Dom Afonso III conquered the city in 1239. Like most towns in the Algarve, Faro is a mixture of Arabic and Catholic influences, something which is evident in the city’s architecture.

Nowdays, its most important buildings are Igreja Matriz de São Pedro, with its golden interiors and artistically crafted details, and the Cathedral of Faro, with a magnificent red organ with drawings of the Chinese culture and a beautiful statue of the Blessed Mother embellished with flowers. But it is the city’s beaches on paradisiacal islands that most attract tourists to the region’s capital: Faro’s Beach (Praia de Faro), Farol’s Beach (Praia do Farol) or Culatra’s Beach (Praia da Culatra) are 3 beautiful beaches that sit in two islands (Faro’s Island and Culatra’s Island where you can also find Farol’s Beach). During summer, these beaches get crowded with visitors. To welcome them, the city organizes several night concerts and spectacles that add to the atmosphere.

It is hard to describe the super beauty of Lagos to anyone who has never been there as the spectacular nature assaults our eyes with so much colour and splendour. Lagos’ coast is blessed with gorgeous rocky formations that rise from a turquoise dreamy sea and steep impressive cliffs. In fact, this part of the Algarve coast is so famous that many boat tours make sure to pass by this area.

During summer, the whole town gets a fresh new vibe with most cafes, restaurants and bars extending their working hours. Streets get crowded with tourists and Lagos becomes a vibrant spot where anything can happen. 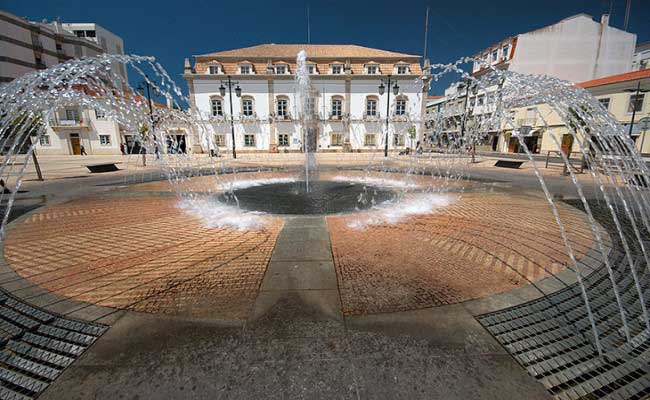 Portimão is the second largest city in Algarve and it even has an aerodrome where you can go skydiving. With its origins dating back to Neanderthal Man, Portimão has played a vital role in the development of the region, especially during the Discoveries and during Second World War when it exported canned fish to the whole world.

Nowadays, the city relies heavily on tourism which comes pouring in between June and September. To welcome the thousands of tourists, Portimão hosts a number of music concerts and dance and theatre shows during the warm summer nights. This is definitely the place or you and your family as its cosmopolitan community, a vibrant marina, stunning beaches and a rich history ensure there is something for every taste. 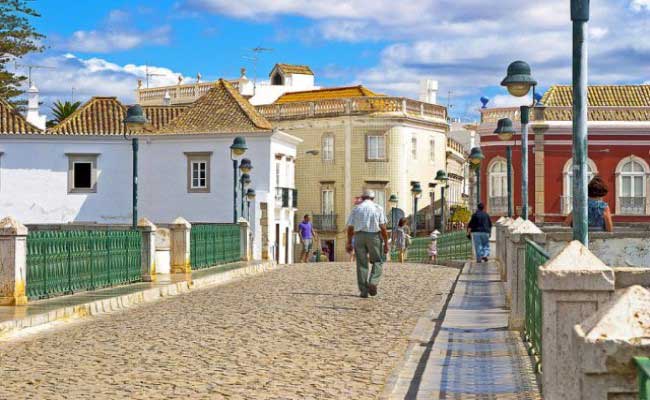 Tavira is one of the most beautiful towns in Portugal. Split in two by river Gilão, Tavira mixes the charm of a Christian fishing village with the inheritance of Arabic architecture. Its traditionally white-washed houses embedded in the cobble narrow streets are right next to the town’s 37 churches. Its historical beauty ranges from the Roman Bridge to Tavira’s Castle and Igreja da Misericórdia de Tavira.

However, the surrounding nature is also a pivotal mark in the town’s appeal: long beaches of white virgin sand lie separated from the mainland creating perfect pieces of heaven just a twenty-minute boat ride away. If you happen to pass by Tavira, you must certainly visit its ravishing beaches such as Barril’s Beach (Praia do Barril) or the Island of Tavira’s Beach (Praia da Ilha de Tavira). 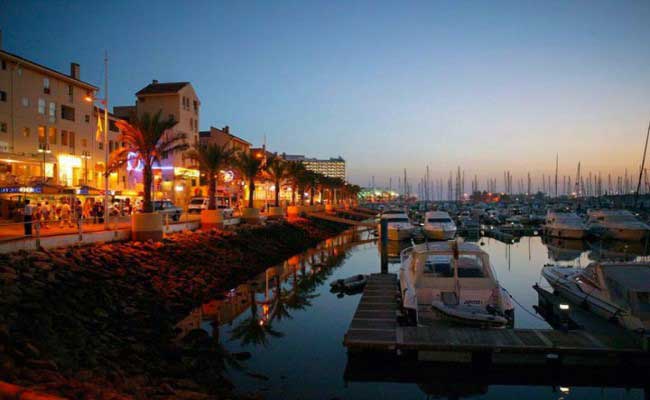 First founded by the Romans when they came to the Algarve, Vilamoura was an unimportant piece of land until 1974, when its marina was inaugurated. The first marina to be built in Portugal helped the town to rapidly develop into one of the largest touristic complexes in Europe.

Nowadays, Vilamoura has six world-renowned golf courses, a Tennis Centre, a Sports Club, a Shooting Club and a Lawn Bowling Club. It is also home to several 5-star hotels, self-catering villas and touristic apartments. Vilamoura Marina is one of the best places to go out at night, as it offers plenty of restaurants, cafes and bars with live music or karaoke.

Vilamoura Casino is also one the biggest attractions, with over 500 slot machines, gaming rooms with Blackjack, Roulette and Poker, and live shows that can be enjoyed over a silver service dinner.

Author Bio: A guest post by Algarve Fun writer Vicente Lourenco. Having spent most of his life in the Algarve, Vicente knows most of its secrets and loves to share it with newcomers. He likes travelling, outdoor sports and exotic food.

Tags:places to visit in Algarve

0 0 0
Previous : 8 Awesome Restaurants in Scranton, Pennsylvania
Next : Things to do in Jacksonville (Florida)